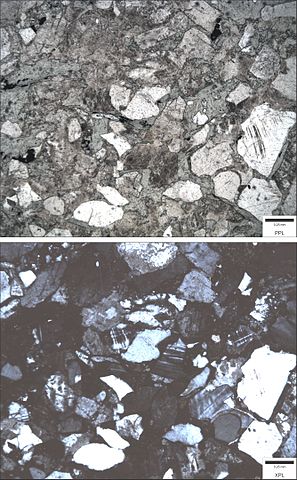 In the past, some Egyptologists have use the term “schist” in describing certain ancient Egyptian artifacts. In almost all cases the term “schist” is not being used in a modern geologic context (i.e. a medium- to coarse-grained foliated metamorphic rock), but rather it was being used to describe two types of metasedimentary rock called metagreywacke and metasiltstone. These rocks are essentially the sedimentary rocks greywacke and siltstone that have been very weakly metamorphosed, and are homogeneous and have no visible schistosity. The metamorphism of greywacke and siltstone increases the cohesiveness of the mineral grains and its rock hardness, making these rocks less susceptible to fracture during carving. This allows for fine detail and intricate shapes to be carved in objects such as in palettes and vessels (Fig. 1 and 2). Metasiltstone is also misidentified as slate, and both metagreywacke and metasiltstone have been misidentified in some cases as basalt (Nicholson & Shaw 2000, Penny 1993). There are, however, examples of the correct use of the term schist such as in the description of mica schist that was used by the ancient Egyptians for vessels (Aston 1994).

Greywacke is a term that refers to an immature sandstone, generally indurated, dark grey, and consisting of poorly sorted angular to subangular, sand-sized grains. These grains generally consist of quartz, feldspar, and a variety of rock and mafic mineral fragments embedded in a compact clay matrix, which makes up at least 10% of the rock, having the general composition of shale. Siltstones are sedimentary rocks ranging in their modal % of silt, which dominated over a clay matrix similar in compositions to the clayey matrix of greywackes.

Metagreywackes and metasiltstones are found in Egypt in several localities in the Eastern Desert, where they are associated with Precambrian basement rocks and are often found together in the same locality. The main source of these rocks are the immense quarries at Wadi Hammamat (Fig. 3). These quarries were worked from the Predynastic period to the Roman period. The typical grain-size of metagreywackes and metasiltstones at this location are very fine- to fine-grained (0.06-0.2 mm) and silt sized (0.01 to 0.02 mm), respectively (Nicholson & Shaw 2000). The metagreywackes are occasionally pebbly and dark greenish-gray to mainly grayish-green in colour. Metasiltstones are dark purplish- and greenish-gray to mainly grayish-green in colour. The green colour is associated with a high content of the mineral chlorite, formed during weak metamorphism due to deep burial in the Earth’s crust (chlorite zone). Photos of polished rock slabs obtained from various metagreywacke quarry sites used by the ancient Egyptians can be seen at the Ancient Egyptian Quarries website section #28.