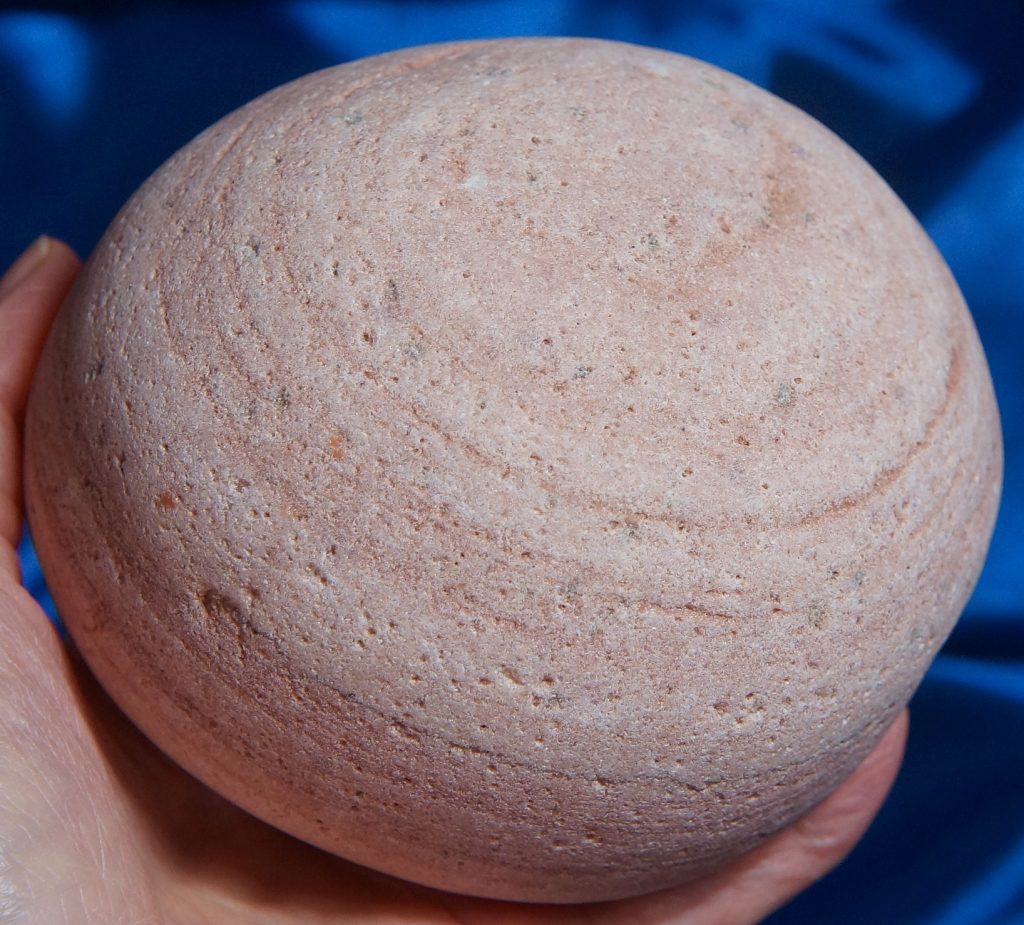 Diorite, granodiorite, anorthosite, and gabbro occur in a number of locations in Egypt, such as in the Eastern and Western deserts and at Aswan (Fig. 1).

Granodiorite was quarried at Aswan (Fig. 1) from the Predynastic period to the Roman period (Nicholson & Shaw 2000). The rocks of the Aswan quarries are of Precambrian age. At this location granodiorite is coarse- to mainly medium-grained, and dark grey to nearly black in colour (Fig. 2). Its primary minerals consists of plagioclase feldspar, quartz, alkali feldspar, biotite, and hornblende, the most common accessory minerals include apatite, zircon, sphene, ilmenite, and magnetite. The granodiorites of this deposit are gradational with monumental black granite, and sometimes tonalite and quartz monzodiorite. It is commonly porphyritic with phenocrysts up to 3 cm in length (image). The phenocrysts vary from light grey to pink in colour, and range in concentrations from closely packed to largely or entirely absent in some specimens. The granodiorite deposits at Aswan are often gneissoid in texture, exhibiting parallel orientated feldspar phenocrysts. A number of polished rock slabs images of monumental black granite and granodiorite can be seen at the Ancient Egyptian Quarries website (section 5b). Because of the gradational nature of the varieties of rock in the Aswan deposits many artifacts identified as being made of monumental black granite are more likely made of granodiorite.Artifacts described as being made of ‘diorite’ or ‘syenite’, from rocks quarried at Aswan, are made of granodiorite. Non-porphyritic varieties are often misidentified as dolerite. Italian stonecutters refer to this rocks as black granite, black granite of Syene, and ancient grey granite. Aston (1994) describes a black and white speckled, medium-grained hornblende granodiorite of unknown source, possibly the plutonic masses of the Red Sea Hills, consisting of plagioclase feldspar (45%), quartz (15-20%), alkali feldspar (5%), and hornblende (30%), with accessory minerals (3%), including opaque oxides, sphene, and apatite. In hand-specimen it resembles diorite and is frequently called diorite, spotted diorite, and sometimes gabbro by archeologists.

On the south bank of the Nile River at Daygah (Fig. 1) in the el-Bellal district, near the west end of the Fourth Cataract, Sudan, granite gneiss to granodiorite gneisses were quarried during the Late period and Napatan-Meroitic period. These rocks represent Precambrian granite gneiss to granodiorite gneiss which are dark gray (nearly black on weathered surfaces), and are medium- to coarse-grained. An image of a polished rock slab specimen from this location can be seen at the Ancient Egyptian Quarries website (section 8).

Anorthosite, diorite, and gabbro gneisses were quarried at the Gebel el-Asr quarry (Chephren’s Quarry, Fig. 1) in the Nubian Desert about 65 km northwest of Abu Simbel. The Gebel el-Asr quarry has been worked from the Predynastic period to the Old Kingdom period, and also during the Middle Kingdom. They consist of Precambrian diorite-gabbro gneisses to mainly anorthosite gneisses which generally exhibit greenish-black coarse foliation, streaks or patches, and are fine- to medium-grained. They are generally composed of plagioclase feldspar and hornblende, with minor amounts of biotite, chlorite, magnetite, and sphene, and contain no alkali feldspar and little to no quartz. The dark rock varieties are considered to be diorite or gabbro gneisses, in which 50% of the rock is composed of hornblende and biotite (Fig. 3). The lighter varieties are the anorthositic gneisses, which contain about 5 % hornblende (Fig. 4). In these images the light grey mineral grains are plagioclase feldspar and the greenish black grains are mostly hornblende. The identifications of diorite and gabbro gneisses are dependent on the composition of plagioclase feldspar. In the case of the diorite gneiss the plagioclase is sodium-rich, where as in the gabbro gneiss they are more calcium-rich (Nicholson & Shaw 2000). Images of anorthosite and gabbro gneiss polished rock slabs can be seen at the Ancient Egyptian Quarries website (section 6). In strong sunlight the Gebel el-Asr quarry is known to exhibit a blue glow, which has been suggested to be the result of feldspar iridescence, and may be a reason why this remote quarry was used by the ancient Egyptians (Harrell and Brown 1994). Anorthosite, diorite, and gabbro gneisses are sometimes identified as ‘diorite’ and ‘Chephren/Khafre diorite’ in the archaeological literature. The ancient Egyptian word for these gneisses is mntt (Harris 1961).

At Wadi Umm Shegilat (Fig. 1) a hornblende diorite was quarried during the Predynastic period to Early Dynastic period, and also during the Roman period. Hornblende diorite is found in Precambrian basement rocks, and is mottled light grey, pale pink, and greenish-black in colour. It consists mainly of substantially altered plagioclase feldspar (60%) and hornblende (40%), with minor amounts of magnetite and small veins of calcite and epidote (Aston 1994, Nicholson & Shaw 2000). The rock is very coarse- to mainly coarse-grained. Very coarse-grained varieties can be pegmatitic with grains up to 7 cm in length, this type of rock can be called a pegmatitic hornblende diorite. Polished rock slab images of hornblende diorite can be seen at the Ancient Egyptian Quarries website (section 16). This rock is sometimes called ‘black and white diorite’, ‘porphyry’, ‘porphyritic rock’, or ‘syenite’ in the archeological literature. The term granite of the column is used by Italian stonecutters. The ancient Egyptian word for diorite and gabbro was ink km (Harris 1961). An example of an ancient Egyptian macehead made of hornblende diorite from an unknown quarry site is presented in Fig. 5.

A pegmatitic diorite near Gebel Umm Naqqat (Fig. 1) was possibly quarried during the Early Dynastic and Roman periods. It consists of a mottled light-gray/white and black and is very coarse to mainly coarse-grained. These rocks are of Precambrian age. An image of a polished rock slab specimen from this location can be seen at the Ancient Egyptian Quarries website (section 28).

During the Roman period Precambrian quartz diorites were quarried at Wadi Umm Balad, Wadi Barud, and Wadi Fatiri el-Bayda (Fig. 1). These rocks are fine- to coarse-grained and are mainly white to light grey in colour, and can exhibit various shades of green colouration. Images of polished rock slab specimens of quartz diorite from these locations can be seen at the Ancient Egyptian Quarries website (section 14, 18, 20).

Gabbro was quarried at Wadi Maghrabiya and Wadi Umm Wikala (Fig. 1). These sites were worked during the Roman period. Images of polished rock slab specimens of gabbro from these locations can be seen at the Ancient Egyptian Quarries website (section 23, 21).

The use of granodiorite goes back to late-Neolithic and Predynastic times where it was used in the making of axes, palettes, bowls, and mace-heads (Lucas and Harris, 1962). During Pharonic times granodiorite was used for the same purposes as granite but in smaller quantities. This includes architectural purposes such as for the lining material in chambers and passages, interior structure of temples, for door frames, and as facing stones. For statuary purposes it was used for sarcophagi, and statues, obelisks, stelai, and other such objects.. During the Predynastic period to the 3rd dynasty a black and white speckled granodiorite was used to a small extent chiefly for making stone vessels (Aston 1994). Anorthosite, diorite, and gabbro gneisses from the Gebel el-Asr Quarry were first used during the Early Dynastic period and were mostly restricted to the Old Kingdom period, mainly the 3rd and 4th dynasty, and also in the 12th dynasty. The distinctly banded diorite gneiss were used mainly for statues (Fig. 3) and sometimes vessels, and the more massive anorthositic gneiss were generally used for stone vessels (Fig. 4). Hornblende diorites were used for stone vessels during the Predynastic to the 4th to 5th Dynasty, and also a few isolated examples from the 11th Dynasty and New Kingdom period (Aston 1994). The Romans used diorites, quartz diorites, and gabbros for small columns, basins, pedestals, and pavement tiles (Nicholson & Shaw 2000).

Links to examples of Diorite, Granodiorite,
Anorthosite, and Gabbro Usage